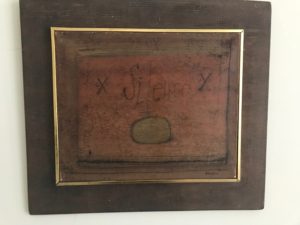 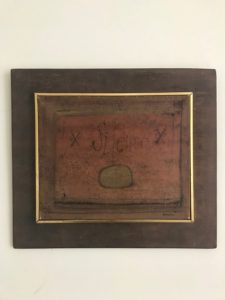 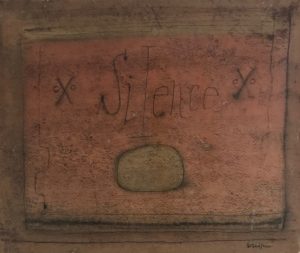 Raymond Grandjean was anti-conformist and painted figuratif, abstract, pop art and also produced collages. The Galerie Philadelphie, based in Paris started to represent Grandjean from 1959 and promoted his profile, by staging several exhibitions. Grandjean also exhibited at the Biennale in Paris in 1961 and in 1964 at the Musee des Arts Decoratifs of Paris. This painting as well, as the other painting Rencontre, which we are also selling seem to have been exhibited at The North Carolina Museum of Art in 1967.

Grandjean is more known for his abstract paintings, which have certain similarities to the work of Paul Klee and Joan Miro. These are two very good examples of the artist’s work and more and more sought after. A retrospective of his work was held in 2015 in the Musee des Beaux de Lyon, of which we have the catalogue.